There are numerous ballet companies across the globe, and you might be curious about which of them are ranked highest. Although the answer to this is quite subjective, we have tried our best to provide an unbiased list of the best companies in the world.

In making our choice, we considered some important factors. We considered the caliber of the dancer, that is, where the company trained, technical achievements, and similar stuff. We took into consideration the size of the company as well because although some small companies are excellent, larger companies have more dancers and can have better dancers. We also considered whether it is a touring company or a home company and the repertory of the company.

With all these factors in mind, we present to you the eight best ballet companies in the world!

The Best Ballet Companies in the World: Paris Opera Ballet

Go through a list of the best ballet companies in the world, and you will discover that the Paris Opera ballet appears in every single one.

Also known as the Salle Le Peletier, this company is hands down one of the most iconic, successful, and best ballet companies on the planet.

Additionally, the Paris Opera Ballet is the company that set the tone for turnout and set the cornerstone of ballet technique. The company has a rich history and was founded in June 1669, making it one of the oldest ballet companies on the planet as well. The Paris Opera Ballet was originally founded to perfect dance.

Late in the 17th century, 13 professional dancers were used to drive the academy, turning the company from mere court entertainment to professional art for the populace. This transformation birthed the Romantic Ballet which is now known all over the globe. Throughout the 18th and 19th centuries, The Paris Opera Ballet dominated the industry.

In recent years, the ballet has been a source of fun and home to certain interesting characters. For example, in 1983, Rudolf Nureyev was appointed the director of dance. His forceful personality resulted in clashes with a number of main stars of the group. Also, in 1990, Patrick Dupond, who himself had been a dancer since 1980, became the director of dance and organized a review of all the dancers in the company. Since 1995, Brigitte Lefevre has been the director of dance.

Today, this ballet employs up to 150 exquisite dancers and resides between the Bastille Opera House and Palais Garnier. It is admired by all ballet lovers on the planet and it is the dream of many a ballet dancer to perform in the company.

The Australian Ballet is also viewed as one of the best ballet companies in the world. Although founded in 1962, when compared to companies like the Paris Opera Ballet is relatively recent; it has made a name for itself and is regarded as a top ballet company in all corners of the world. In its early days, Dame Peggy van Praagh, a renowned repetiteur and director served as the artistic director.

From then till now, the company's dancers are known for their ability to entrance audiences, captivating them with their beautiful, ethereal movements. The legacy of Dame Peggy van Praagh continues to be seen in the ballet of this company. Today, this company is viewed as one of the best international ballet companies.

This is the leading ballet company on the continent and was founded by art patrons who had an avid interest in Australia having a ballet company to call its own. The original members and dancers in the company were sourced from the former Australian Borovansky Ballet.

Today, the company has up to 80 wonderful dancers. It also employs other people including dance educators, leaders in injury prevention, and even an orchestra of up to 62 musicians.

The company balances classical ballets with modern commissions while retaining the original Australian style. The current artistic director is David McAllister who has served for up to two decades.

Russia is known for the beauty of its ballet companies and is one of the countries where ballet is hugely popular. Well, among the plethora of ballet countries in the country, the Bolshoi Ballet is the most highly regarded. It is one of the oldest ballet companies in the world and was founded as far back as 1776. The ballet here is unique and different from what you'll find anywhere else in the world.

The Bolshoi Ballet Company is based in Moscow and at first, was the pride of the city before receiving fame and critical acclaim after Moscow was made the capital of Russia.

The ballet has danced for several notable dignitaries through the years and is one of the most sought-after ballet companies in the world. The Bolshoi Ballet is the leading ballet company in Russia. It is famous for the grandeur of its productions and the production of classic tales and children ballets that harken back to the 19th-century classical dance.

It wasn't always known as the Bolshoi Ballet. In fact, the name was adopted in 1825 when the Bolshoi Theatre took the reins of management from the Petrovsky Theatre, which was founded in 1776.

Before 1900, the company was known as one of the best in Russia, but when Alexander Gorsky became the Ballet Master that year, the ballet started to gain international fame, carving out its identity and making acclaimed productions that were on the lips of every ballet lover around the world.

The company suffered some decline for several years until Gorsky was appointed as the maitre de ballet. By the 1960s, this company had staked its claim as one of the best ballet companies in the world.

From that year onward, the fame of the company grew, and when it began tours in 1950, it was acclaimed as one of the best ballet companies on the globe.

As with many things American, the company has faced scandal. In 2018, the then ballet master Peter Martins resigned over allegations of sexual harassment. However, an investigation did not find him guilty.

Alicia Markova, in 1933, became the first prima ballerina of the company. When she left two years later, part of her roles was placed on the slender shoulders of 16-year-old Margot Fonteyn. She bore these admirably and grew to become one of the greatest ballerinas of all time. Since its change of name and receiving the royal charter, this company has featured some of the most famous choreographers of the age.

One of the unique things about this company is the technical prowess of its dancers. The company set the tone for turns and jumps. Many dancers and Prix winners have headed over to The Royal Ballet Company to make a name in the industry.

Check out a performance by the Royal Ballet Company below:

This next theatre is one of the most popular and best ballet companies in Europe, and indeed the world. The company is known for the sheer propensity of innovation in styles and movement.

The company was originally founded by Jiri Kylian and today is directed by Paul Lightfoot. The company is home to 46 of the most exciting, innovative dancers across Europe.

Since its creation in 1959 by Benjamin Harkarvy, Verstegen, and Carel Birnie, along with 18 dancers from The National Ballet, this company has always stood out among its contemporaries. It offers a non-conformist, exhilarating production that places the company firmly on the international stage.

The company has a reputation for training and grooming professionals from among its ranks to become world-class choreographers and dancers. The current director, Lightfoot, is evidence of this.

This company is a large ballet company that rivals anything from North America and even Europe. It is the largest company in Canada and was founded by Celia Franca back in 1951. The ballet originally took most of its inspiration from the Royal Ballet (which we have considered above). The company focuses on themes of Canadian unity and local tradition.

National Ballet of Canada is currently the only company in Canada that presents audiences with a plethora of traditional full-length classics. The company has toured around different countries, from within Canada and the United States to Hong Kong, Mexico, and Germany among others. Since its creation in 1951, it has reportedly performed for more than 10 million people!

The company's repertoire includes productions by Wayne McGregor, John Cranko, and other classical figures. Although it cherishes the classical works, it is also inclusive of modern productions and new ballets. Like some of the best companies, the National Ballet of Canada also focuses on developing local choreographers. 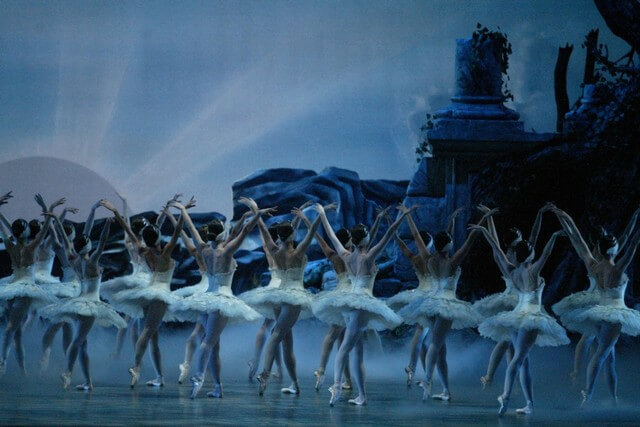 Throughout its 77-year history, the American Ballet Theatre company has wowed audiences in more than 130 cities and has been viewed by over 450,000 people.

Recognized as a living national treasure, few ballet companies in the world can match the size, reach, and scope of the American Ballet Theatre. The company has a repertory of full-length classical ballets and modern ballets. The current Artistic Director is Kevin McKenzie, who is himself a former Principal Dancer of the company.

All of these companies are easy to access today because of social media. They are the standard in the industry, setting the tone for the look and feel of ballet every year. So, here you have it – the best ballet companies in the world!