Marching bands are comprised of several musical instruments. Imagine the magic that is created when several sounds come together to give a unique, beautiful sound. Marching bands are rightly part of events because of the charisma and fun that they bring. Each instrument brings something to the table. In this post, we will see ten of the marching instruments that every band needs. These are divided into sections based on the type of sound that they produced. So, if you are looking to create a marching band, or are just curious to know which instruments make up a marching band, read on!

Snares form a unit of their own. Think of revolutionists in wars past and you can understand the appeal of the snare drum. It was originally used in military operations, and remains of snare drums have been found in ancient Egypt. They are drums that are used in isolation to create isolated rhythms and beats. It is one of the most commonly used drum pieces and will outline the tune of the marching band.

The strong, piercing beat of the snare drum is distinguishable wherever it is heard. It is an important and amazing instrument that can be used for solo rolls. It is also used for performing solos (remember the 2002 movie Drumline directed by Charles Stone III). The snare drum also has a chain attached to the bottom that adds dynamism to the sound.

Snare drums are the most flamboyant part of the percussion instruments in the marching band and form an essential part of the marching band as it strolls in a parade. These drums come with a similar width to what is found on a drum set, however, they have a depth that is twice the size of the snare on your typical drum set. Because of this design, it offers a fuller sound and projects further. 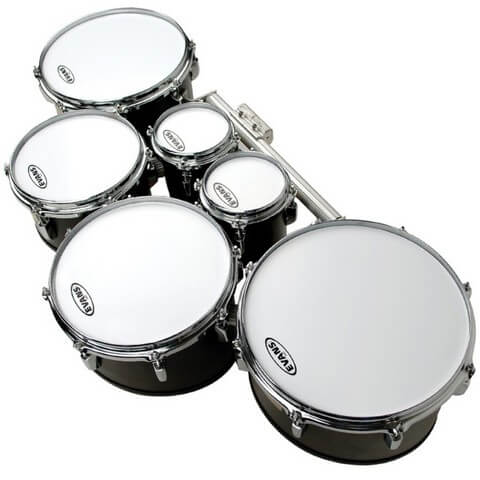 Tenor drums are to the Snare drum what Robin is to Batman. They are the sidekicks of the snare drums and add another dimension to the composition of sounds. Using these drums, the overall rhythm is elevated and accented. Tenors are also referred to as the Quads. They are typically in a set of four or six drums carried and played.

For most marching bands, the composition is four main drums and a pair of accent drums. All these are set together and carried on the body via straps. It should be noted that the number of tenor players in a marching band is highly dependent on the number of snare drums. For instance, if there are three snares, you will have two tenor players. The tenor and snare drums, more than any other instruments in the marching band, are created to complement each other. 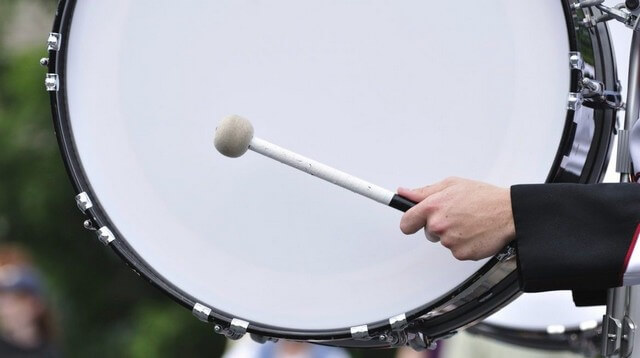 Although the bass drum doesn't offer plenty of dynamism, it is arguably the most significant of the percussion instruments. The marching bass drum is markedly different from that found in a drum set and there can be more than two bass drummers in a marching band. It is a large drum that is usually attached to the body using shoulder straps. The straps are necessary because it would be nearly impossible to hold on to the drum throughout a parade.

It is not hit with as much vigor as the tenor or snare drums, but that doesn't mean that the sound isn't impressive. Using the soft mallet, the drummer can produce a deep, bass tone that is recognizable anywhere. Like a guitar, you can tune the bass drum to a musical note. It is mainly important because it gives another layer of depth and bass to the whole composition of sounds.

Here's a great demonstration of the complexity of the snare drum:

Cymbals are the ‘odd sheep' in the percussion family. These are easy to identify as they come as large, circular metal plates. Even more unique than their appearance is the sound. 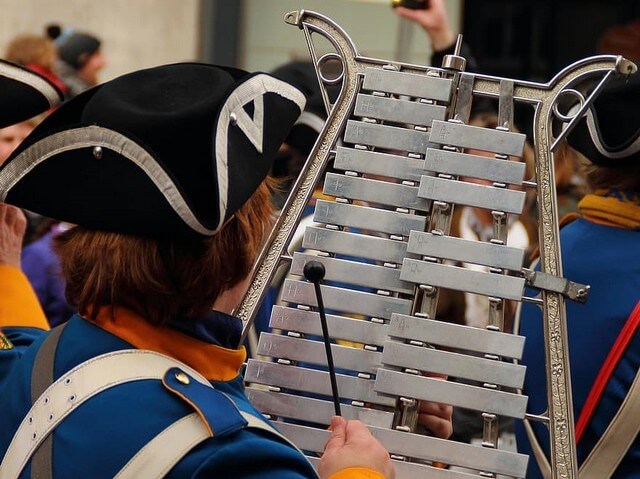 This is a combination of two instruments. They are important to every marching band, although the wood blocks are more of an experimental instrument than the glockenspiel.

The glockenspiel is like cymbals, but instead of coming in a round large shape and hit together, is in a bar shape and is hit with a small metal mallet somewhat similar to what is used for the bass drum. The name is drawn from a German term that means ‘a set of bells'.

This marching band instrument is excellent because the metallic nature makes it create high notes. The higher tones of this instrument are eerily similar to those of the treble clef on a piano. Just like the bass drum, it is one of the larger instruments and is carried with the aid of a shoulder hardness. It is very similar to the xylophone, but instead of wooden bars, the glockenspiel is made of steel and arranged in a pair of sections.

Wood blocks, on the other hand, resemble the glockenspiel in terms of shape. It comes in a bar shape but is made of wood. Its sound is experimental and can give the music a jaunty, bright aspect.

The instruments found in the brass section of a marching band are some of the most distinctive and attractive of all the instruments. These instruments give rich tones that vary in intensity and draw another stroke of impressiveness to the composition of the marching band.

As the name implies, these instruments are beautiful and polished and gleam especially in the glorious sunshine. Although most of them are created from brass, they are actually classified based on the type of sound produced.

Most of the sound comes from the player’s control over airflow and the shape of the lips. These instruments are also easy to modify with accessories.

At first, the trumpet was used for military purposes; it is now used for more friendly endeavors. It is an excellent instrument played by blowing air through closed lips right into the trumpet's mouthpiece. This compressed air then pushes valves which in turn create the sounds typical to the trumpet. The trumpet is a versatile instrument that cannot just play harmony but can also play a big role in the melody line.

Another set of popular instruments in the percussion section are the cornet and trombone. The cornet is the smaller sibling of the trumpet. To that end, it is also played by pushing air through closed lips into the mouthpiece. The air is then manipulated via the valves to produce different sounds. It is also a popular musical instrument in any marching band. The cornet gives a mellower tune than the trumpet, and due to the small size, it is one of the most common instruments in a marching band.

These are what add lovely variety to the marching band composition. They produce a sound that is radically different from the others in the marching band but still manages to sound exquisite. With the woodwind instruments, you can include softer melodies and jazzy undertones to the musical composition. 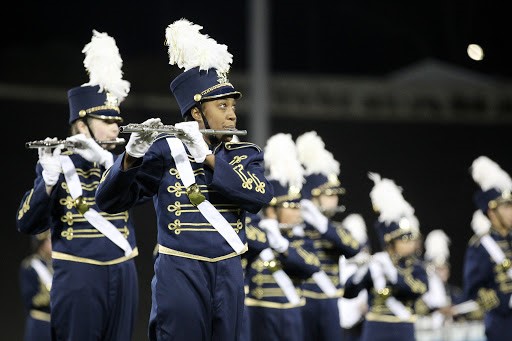 This is a common instrument that is used to make high-pitched tones. This instrument is widely regarded among scholars as one of the oldest manmade musical instruments. And it is clear why it was easy to stumble on. After all, some have discovered flutes made of bone that can be dated back to 80,000 years ago. It can be played along with the other instruments in the marching band or played solo.

The flute is an essential instrument that works to carry the melody of a composition.

The piccolo is very similar to a flute, with the main difference being the smaller size. It gives a higher pitch than the flute, and in fact, than most of the instruments used in a marching band. Just like a flute, it can be played solo and will enhance the vibrancy of the music composition. 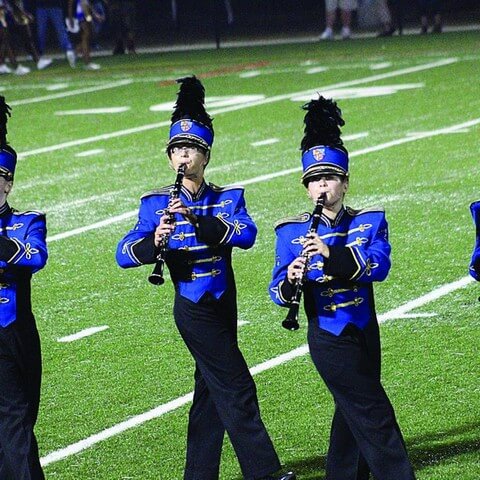 This instrument has also existed for quite some time. Studies reveal that it has been around since the early 1600s, and is the offspring of the now-defunct chalumeau.

Right from the time of its introduction, it has undergone plenty of changes and modifications to end up as what we have in most marching bands today.

This instrument garnered fame because of the ability to play different musical keys on a single reed instrument. And as time passed, innovations were made to make it even more versatile and play more musical keys. The change to the standardized clarinet from the chalumeau occurred in the 1800s.

The clarinet is a reed instrument with a cylindrical design. One end of the instrument is straight while to other ends in a ball. It is quite similar to a flute but can play low tones too. 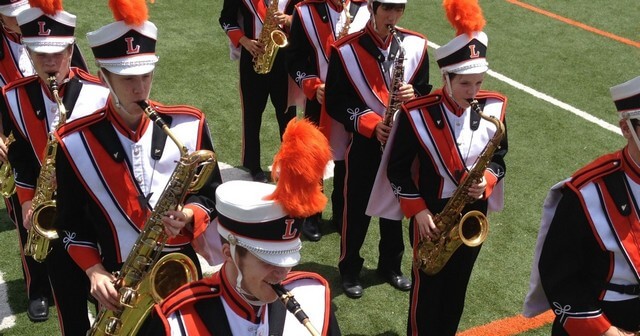 Last but certainly not least is the saxophone. It is one of the newest instruments to man and was invented by Adolphe Sax in 1846.

The other types of saxophone include the soprano, sopranino, tenor, contrabass, and subcontrabass.

The marching band is a source of good fun and entertainment. No matter the event, a marching band in full flow is a joy to behold, and seeing it live is an exhilarating experience. While this list above is by no means exhaustive, the instruments mentioned above are the most common ones that you will find in any marching band.