Looking for the best musical theater duets of all time? You're in the right place!

If you are a great music lover, there is a great variety of musicals that will make you cry, laugh, and believe in love again. Some were inspired by books or movies and others, so successful that they were taken to the cinema. Musicals that have traveled the world and that have broken Billboard records are shining for millions of people.

Years of success guarantee that these nine musical theater duets must be part of the list of the best musicals in history.

The Most Famous Musical Theater Duets

While it's debatable what's the most famous and well-known musical theater duet in the world, I can say with some certainty that our top choice below will rank right up there. This legendary piece from one of the most enduringly popular pieces of musical theater is still a big box office draw.

You know which musical I'm talking about. Yep, the Phantom of the Opera!

Christine and Raoul and their romance. What do they expect from each other? The song describes a sound pop mixed with opera.

2014 made it the 26th year that the Phantom of the Opera, Andrew Lloyd Webber's musical was performed in New York. It is the longest-running show of Broadway history and totaled $6 billion worldwide (more than any other musical or movie).

The Phantom isn't the most rewarding role for an outstanding man. He spends his time on stage with his face covered or with a hideous scar that distracts from any authentic sentiment an actor can wield to squeeze the role's histrionic line. He's also off the scene a lot, running around on rooftops, creating trouble when he feels his beloved, soprano Christine Daaé Boggess, is not being treated with due deference, or when his monthly payment of 10,000 francs is not on time. (The ghosts of nineteenth-century operas must have had a good union.)

However, Lewis does a fine job of his role. His ghost prevails with his will, while his brilliant voice comes echoing from the skies, thrilling with his energetic love, although not reciprocated by Christine. The moment of anguish when she instinctively rejects him out of disgust at his disfigurement gives a note of acute pathos.

Boggess's clear, bright voice meets the challenges of music with ease, flying through the pseudo-coloring passages of Lloyd Webber's music that parodies the opera. Perhaps it could improve his fainting spell, but this is only a trifle in what is a fiery and stylish performance within a colorless part of the play.

From 1965, it is a song composed entirely by Sonny Bono for his then-wife Cher and whose music interprets the musical marvel that the “Wrecking Crew” was. What could go wrong? Absolutely nothing. It is one of the best theater duets. Or at least one of the most popular.

The formula was correct: simple lyrics, catchy melody, and flawless production. The good thing about ‘I Got You Babe' is that it can seem like a cloying song like a meringue or a musical pearl depending on the day of the year.

Despite Cher's dislike of her and Ahmet Ertegun's wanting to relegate her to the b-side of the single, “I Got You Babe” became their star song and got them a lot of money. Oh, it was composed shortly after Bob Dylan's “Like a Rolling Stone” came out.

We would have to include a country music duet, but we have not dared to go into the purest because opening that door would have meant not leaving that room. To counteract so much soul, here's a song written in part by the great George Jones and recorded as a duet with Gene Pitney.

It is very difficult to overcome Jones' part of that first performance, impossible we would say because we are fans of the “No Show”, but nobody can resist the charm of the quintessential country rock couple.

The version we focused on appeared on Parsons' first solo album. A song in which the singing voices embroider it, especially Harris, but which in turn has a delicious musical accompaniment. Too bad of a mix with less prominence for Byron Berline's fiddle when Gram and Emmylou are singing a duet.

A strange plant emerging from an eclipse saves a poor suburban florist from ruin. A plant that suddenly begins to speak asks for human blood from its owner, Seymour. Seymour is in love with Audrey, someone abused by a sadistic dentist boyfriend.

Audrey is used to having abusive partners. She thinks it is normal because of the life she has led. Seymour shows him that men can be good and that if he opens his heart to him, they will be happy.

The musical is a little gem remake of the original 1960 Roger Corman film, reinventing it and turning it into a musical, which on the other hand was already playing on Broadway. Surreal, crazy, with comic aesthetics, it is enjoyed from the beginning to the end, with vitalist music that infects optimism, an extraordinary soundtrack that achieves something strange.

60 years have passed since the musical ‘West side story' was released. It's a musical show that is on the retina of many generations thanks to the award-winning film by Jerome Robbins and Robert Wise.

The musical theater duet even won an Oscar. This year, it was seen again at the Festival Hall. Leading the play is Federico Barrios, a young Argentine who discovered at age eleven, after seeing ‘Dracula' in a theater in Buenos Aires, what he wanted to dedicate the rest of his life to. He recognizes that the work that now brings him to Santander are bigger words and he confesses, with humility, that he has assumed this work as a great challenge.

They wanted to tell a story that is still valid, that has to do with the society that we were in the 50s and that, unfortunately, in some things, we continue to be in. It's a story that has to do with gender violence, with machismo and feminism, and with discrimination against immigrants. ‘West side story' tells what the ghettos are like and does it through two gangs, Poles and Puerto Ricans, who have a preconception that they have to hate each other because they are different.

Maria and Tony's love begins tonight. The song is on the AFI list as one of the best in film history and has been covered ad nauseam.

6. “Never in a Million Years” – The Prince of Egypt

One of the newest musicals, The Prince of Egypt, has beautiful songs. One of them is the duet of Moses and Tzipporah, titled Never in a Million Years which, in particular, will fill your eyes with water.

The characters, who previously thought they had all the differences in the world and treated each other with hostility, discover that they fell in love. The voices of Luke Brady and Christine Allado connect beautifully and make the music even more exciting.

One of Disney's best animations is also on Broadway. Aladdin has been on display since 2011, and the most famous song of all, A Whole New World, sung by Aladdin and Jasmine, gets new and beautiful arrangements on stage. The original actors, Adam Jacobs and Courtney Reed did a wonderful job on the musical, and Adam's voice matched too much with Aladdin.

There is a super beautiful video that Adam Jacobs recorded with his sister Arielle Jacobs singing the theme, to announce to her parents that she was cast as Jasmine in the Australian production. 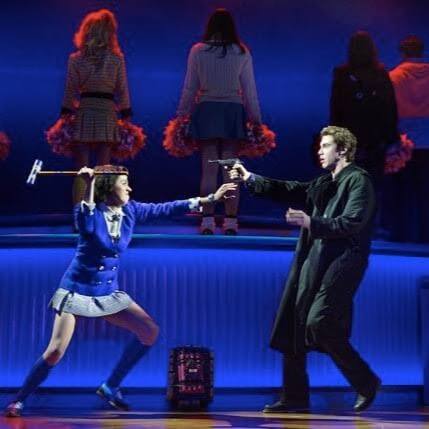 Here we arrive at the most clueless musical of all! Heathers is inspired by the 1989 film of the same name, and on the stage, it gets a very rock and roll look that I love!

Veronica and JD's duet, Dead Girl Walking is just as weird as the rest of the plot, since she basically invades his room to have sex (she has the “rope around her neck” on account of Heather Chandler and uses the “last minutes of life” to calm down.

Yes, I love this duet, and I believe that Barrett Wilbert Weed played Veronica with mastery. I love her voice, which already has a more rocky feel, with a slight tear and a little bit of metal in the treble. And it married very well with the beautiful voice of Ryan McCartan.

There's a great performance by Ryan McCartan singing Dead Girl Walking and switching roles, at Pronoun Showdown. He also mentions that, in the musical context, the song has a role of female empowerment and women's sexual freedom, but when the pronouns are changed, we have a problem. So, he changed the lyrics and it was amazing!

To finish off with a flourish, I have the iconic duet of Maureen and Joanne, in the musical Rent! Take Me Or Leave Me is one of the most fun songs in history, and here we can clearly see their personality.

Joanne can no longer bear Maureen's diva and flirtatious attitude and she makes him see that she is the only one in his life. Things don't end well at all.

We've delivered 9 musical theater duets that will leave you with creeps. Note by note, word by word, these songs will take over your being and reach your throat where you try to reproduce the sounds that describe the purest state of the character.

Fear, love, hate, anger, happiness, music can do everything and musical theater even more. They are the musical theater duets you wish you could emulate even at karaoke nights. Curtain up!