I keep getting asked this in comments and over email, so I figured I'd write a post and clear all doubts.

Should you buy SoundCloud followers

Or for that matter, should you “buy” followers on Instagram, Twitter, or any of the other popular social media services?

I'm going to give you two answers to this question. One will be the “right” answer – and the one you see paraded everywhere around online.

The other answer won't be right, but it will be true. It's what you should be doing, but no one will tell you.

So let's get down to business.

If you've spent any time reading up on ways to promote your  music, you already know the importance of SoundCloud.

Chances are, you've also stumbled upon services that allow you to “buy” social media followers or plays, including on SoundCloud.

A very cursory search for “buy soundcloud followers” showed up tons of websites offering to sell your “genuine” followers for as little as $2 for 100 followers. I'm not going to link to any sites but here is one example:

What's happening here? Is it actually that easy to get followers or plays on SoundCloud? Could you be just $10 away from having thousands of hungry fans?

Not exactly, and I'll explain why.

The Dark Underbelly of Internet Marketing

If you haven't guessed it by now, all the providers offering you thousands of followers for a few dollars are just bot farms. None of the followers they sell are real. They create tens of thousands of bots, then use them to auto-follow accounts.

On paper, this gives you thousands of followers who've “listened” and liked your music countless times.

In reality, you just have a badly made bot profile following you (and countless others like you). Their profiles will often have no images and will have random names like “User12345678”.

A “listen” from a bot is about as good as playing your music in an empty room. No one has actually heard it, and no one actually cares about it.

To understand why services like this exist, you have to first take a detour into the murky underbelly of the internet.

Even though the internet is about to be a 30-year old grown up, big chunks of it are still the immature wild-west that you imagined it to be in the '90s. Spammers and scammers rule the roost in this wild west, sending fake traffic, running botnets, and hijacking computers for financial gain.

Just to give you an idea of the scale of this problem, Twitter suspended 70 million fake accounts and bots in just two months last year. A slightly older study found that nearly 48 million Twitter accounts are bots – roughly 20% of Twitter's entire user-base.

As you can imagine, things aren't any different on SoundCloud, Instagram, or Facebook. Facebook, for instance, removed a whopping 754 million fake accounts in a single quarter in 2018.

Most of these bot farms are operated by anonymous companies located in India, China, and Russia – places where spam laws are hard to enforce and where US regulations are difficult to apply. Businesses, individuals, and increasingly, politicians, buy these fake bot accounts.

Both of these can be used to push agendas and get more traffic.

For instance, social media tools like SoundCloud and Twitter determine what's on the front page (or on the ‘trending' list) based on how many people are currently talking/tweeting about something. If you can get thousands of bots to automatically talk about your latest song or tweet, you can “fake” activity and hit the trending page.

This is increasingly used in politics to push an agenda or to make an agenda seem more popular.

Further, a large number of followers signals authority and popularity. You're more likely to believe a politician, artist, or “influencer” is good if they have millions of followers to their names. Which is why even celebrities frequently buy fake followers – numbering in the millions.

So is Buying SoundCloud Followers Worthless?

Buying fake followers (and that's the only kind you can “buy”) does not do anything for your music. It doesn't get you fans, plays, or popularity.

The only thing it does is make you appear popular, and presumably, get you some bragging rights.

But – and this is where the ethical dilemma comes in – this appearance of popularity is important. To understand why, you need to understand social proof.

Social proof is one of the six pillars of persuasion (the others being ‘likability', ‘authority', ‘reciprocity', ‘commitment', and ‘scarcity'). As Dr. Cialdini (who wrote the book on persuasion – Influence) wrote, human beings are innately social and will look to social cues for making decisions. A belief, object, or person who already appears popular becomes more attractive and likable.

You've experienced it yourself – chosen the restaurant with the longer line out front or bought the product with more reviews on Amazon. The appearance that something is already well-liked by others influences our decision making.

Tell me, which of these two artists would you think is better or more popular? 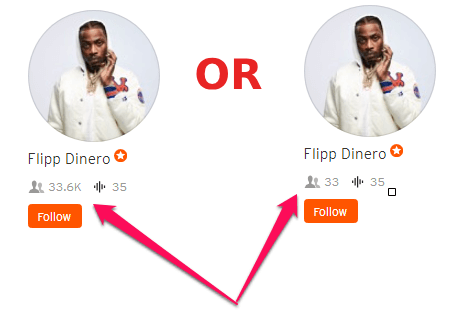 So when you buy followers on SoundCloud, Instagram, Twitter, or any other platform, you're not really buying real followers.

Instead, you're buying social proof. This social proof can help you earn more followers and fans, faster.

It is ethical? Nope. Which is why no mainstream blogger will recommend that you do it.

But is it effective? Yes.

I'm not going to tell you that you should definitely buy SoundCloud followers. As I said, it's not ethical, and you're only going to gain bots. Buy too many and you might even see your account suspended.

At the same time, I'll tell you that buying a few thousand followers can create the impression of popularity. This social proof can make it easier to gain followers in the future. It can also earn you legitimacy.

These are the facts. What you decide to do with them is up to you.

The ideal path would be to buy only a few followers – just enough that you appear more legitimate – and focus on growing an audience of real fans. Don't go overboard with it, and don't make it your only source of listeners.

It's a cheap crutch; treat it only as such.

2 thoughts on “Should You Buy Soundcloud Followers? A Honest Answer”