From Tony Hawk to Paul Rodriguez, here are some of the most famous skateboarders to ever grace the skateboarding world.

Skateboarding is a lot of things to different people. To some, it is a sport, while others view it as recreation, a job, or work of art. Yet for others, it is a way of simply getting around. No matter how you view it, skateboarding in whatever medium, but especially as a sport, is now a billion dollar global industry that has and continues to transform the lives of skateboarders from all over the world.

Who are the most popular skateboarders, and what are they known for? In this post, we will consider the most important, popular, and influential figures in skateboarding. There are several metrics by which to judge the most famous skateboarders, including their repertoire of tricks, income, followers on social media, and so on. We will highlight skateboarders across all these metrics.

Without further ado, let's see the most famous skateboarders in the world.

The Most Famous Skateboarders of the Last 20 Years

Let's take a closer look at the most famous skateboarders of this century:

The first on this list of the most famous skateboarders is Brandon Cole Margera. Born in 1979, he is most famous for the hit show Jackass.

Aside from the number two on this list, Bam is the name on the lips of anyone, even those that aren't skateboard lovers about the most popular figures in the sport. He is the most popular based on several impartial metrics.

His popularity rose when he started making his skateboard films that showcased several skateboarding stunts and tricks of him and his friends. This group, known as CKY Crew, made videos that were at the time revolutionary and this got them picked up by MTV.

The show became an international success and spanned for up to three seasons. It also got frequent plays and replays on TVs around the US and parts of Europe. Bam was the breakout star of the show and became a household name. The show became so successful that it got made into movies and had several spin-off shows. And throughout all of this, Bam was the main star.

Bam slightly fell of the scene because of certain personal issues ranging from fitness and alcoholism to the death of his close friend. Today, you will still find him skateboarding, but this time, he isn't looking for the fame, but for the pleasure he derived initially.

Anthony Frank Hawk was born in 1968 and is famous for several things, ranging from the video game series to being the first person to land the first ever 900. Even before reading this list, chances are pretty high that Hawk's face is what you imagined when thinking about the most famous skateboarders ever. But for Bam, he would certainly top our list of the most popular figure in the world of skateboarding.

Also known as The Birdman, Tony is The Skateboarder and is who many of the modern skateboarders look to for inspiration. In fact, he is likely the only name non-skateboarders know when asked to mention the skateboarders that they know.

Tony became famous when he joined the Bone Brigade, which remains one of the most iconic skateboard crews of all time, and who is responsible for the immense popularity of the sport today. After a brief slump, skateboarding became popular again in the 1990s, and Hawk was the poster boy for the sport. He made history in 1999 by being the first person to land the 900 – a trick in which the skateboarder spins twice and a half times on the board.

This accomplishment cemented his place as a legend and catapulted Tony to fame. A video game bearing his name was released to critical and commercial success. In fact, this game is still being played across screens today.

Tony has also featured in movies, TV series, and he remains one of the most famous skateboarders in the world.

Relive some of his best in this video: 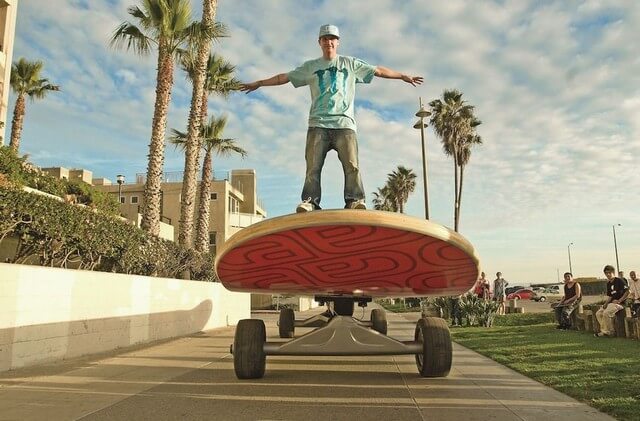 Dyrdek, born in 1974 is one of the richest and most famous skateboarders of all time. Although he is now better known for his TV show Ridiculousness, he has a rich background in skateboarding and is one of the best known names of the sport.

His career as a skateboarder began when he was 12 years old. Due to his sheer skill and talent, he got a sponsorship at that age. When Alien Workshop was founded in 1990, this skateboarder was one of the number one people to be signed to the company.

His knack for skateboarding and business ended up with him owning Alien Workshop later in life. Today, he owns a plethora of successful businesses, showing that he is as good in a boardroom as he is on a skateboard.

One of his ventures is the immensely popular Street League Skateboarding competition, a competition that offers up to 1.6 million dollars to the winners.

Aside from Ridiculousness, Bob is also known for the Fantasy Factory TV show. The show focuses on skateboarding, with the cameras showing Bob and friends in and around his huge warehouse complete with a skatepark and other related equipment.

While Bob might not spend as much time on a board as before, there is no doubt that he remains one of the most popular figures in the sport.

The star of My Name is Earl, Jason Michael Lee, also known as Jason Lee is the next person on this list. Yes, you might know him from the sitcom aforementioned, but he is also one of the most famous skateboarders of all time.

Apart from starring in the show mentioned above, he also has made appearances in several other movies that to be frank, have not been really successful in any sense of the word. AT least, Jay and Silent Bob Strike Back is a bit popular though.

Before he became an actor, though. Jason was a professional skateboarder. His skating career lasted from the late 1980s to the 1990s. At the peak of his skateboarding prowess, he made an appearance on Blind Skateboard Video Days.

The video is one of the most watched episodes on the show. The show has starred some other famous names including Mark Gonzales.

Jason might not be a professional skater anymore, but he still finds time to skate. He briefly waded back into skating waters when he was featured in the Tony Hawk game. This introduced him to the new generation of skaters.

There is no denying that skateboarding is a male-dominated sport. However, Leticia Bufoni has made a name for herself in the industry to become an inspiration to boys and girls all over the world. Born Leticia Bufoni e Silva, he was born in 1993 and hails from Brazil.

She is, apart from being one of the only female skaters to make this list, also the only Brazilian on this our list of the most popular skateboarders in the world. Brazil is known for its football and not skateboarding. She used to play football growing up, and perhaps this ability to control a ball with her feet helped her to develop outstanding board control. Without the shadow of a doubt, she is one of the best skateboarders currently.

She regularly competes in the most competitive skating competitions. She has won up to six X game medals and other accolades. Impressively, she won the 2015 Street League. While she isn't stylish as many other successful skaters, she is better known for her focus and determination, qualities that have surely helped her in the male-dominated sport.

She is also known for her skill and tricks that many wouldn't even dare to try.

Perhaps, though, she is best known for posing nude for ESPN body issue. Her toned, fit body certainly has many people looking for her fitness tips.

You squeeze your face in consternation, wondering who Paul Rodriguez is. Well, you might know him by another name: P.Rod. Recall him now? You likely would.

Paul was born in 1984 and is known as one of the most successful skateboarders of his generation. His name is widely searched for on the internet and videos of him are seen on devices of any aspiring skateboarder. He is easily recognizable and has achieved a lot of success as a skateboarding.

He has been successful at different competitions ranging from The Dew Tour, Street League, X Games, and almost every competition that he has participated in.

He is renowned for his smooth, effortless style on a board and his near perfect board control which means that you will have a pretty hard time finding a video of him falling off the board.

Part of what he is recognized for is that he is one of the first skaters to enjoy a Nike SB sponsorship. He thus has several signature shoes, something that only athletes like basketballers and soccer players enjoy.

Aside from that, he has shown that he knows his way in business as well since he owns a skateboard company. The company makes golden decks which are some of the most sought after even till today.

Ryan Allen Sheckler was born in 1989 and is a very famous skateboarder. He is famous for his ability to jump huge distances and his meteoric rise into the industry.

Aside from his prodigious skill, he is known for his ability to do impressive airs on a board. One of the feats attributed to him is when in 2008, he cleared a 17-meter gap and The Mega Ramp. He also cleared the Costco Gap in 2013.

All of these feats, although great, aren't as popular as his show The Life of Ryan that aired on MTV between 2007 and 2009. The show, as implied by the name, showed the personal life of Ryan. A list of the most famous skateborders would certainly not be complete without mentioning him.

Nyjah was born in 1994 and is undoubtedly the most successful skateboarder of his generation. He has won so many awards and competitions that it is hard to keep count. It isn't a stretch to refer to him as a skateboarding savant. He remains the best skater of this era.

Huston, apart from being naturally talented, practices almost every time, a tradition that he has followed since he was introduced to skating. He is simply a machine at this, and in competitions, he simply outclasses every other skater on the platform. He has a combination of tricks, feints, and moves that are simply unbelievable.

Aside from competing, he also releases video parts of his work. When it comes to doing crazy tricks on the biggest stage, there is no other skater that can handle him currently.

Skateboarding is very cool, and when it first came out, every single kid on the block wanted to learn how to do it. Doing the tricks, jumps, and turns are easier to imagine than do, but the skaters on this list can do all these in their sleep. No wonder then that they are the most famous skateboarders of all time.

From critical to commercial success, you'll be hard-pressed to find any other skater that is as famous or good as the 8 famous skateboarders that we have listed above.